Siskoid’s blog of Geekery shares a goodbye to one of the most iconic stop motion animators, Ray Harryhausen.
Categories Article
ADDITIONAL CONTRIBUTORS Biology of the Blogger 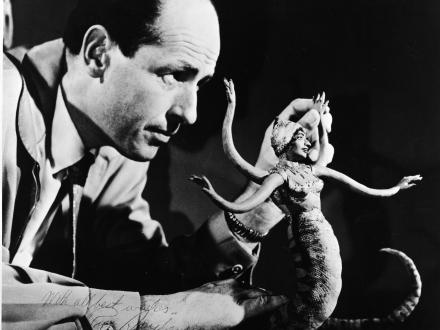 Stop motion animation LEGEND Ray Harryhausen died yesterday. He was almost 93 years old. Between 1949 and 1981, he not only gave life to a host of creatures, both dangerous and benign, but he created a genre that was not, until then, viable, aside from a few exceptions like King Kong (animated by his mentor and friend Willis O’Brien). Harryhausen took O’Brien’s techniques, improved upon them, and turned them into an industry that spawned many fantasy and science fiction classics – Mighty Joe Young, Earth vs. the Flying Saucers, The 7th Voyage of Sinbad, Jason and the Argonauts, to name the most iconic – and inspired several generations of animators, writers and directors. Today’s CG animators may not be working with clay and metal wire, but most name Harryhausen as a strong influence. And well they should. Looking at his characters today, they have an impressive range of body language and expression. May I recommend a YouTube that spans his entire career as proof?

Some wonderful stuff. Thanks for the monsters and the memories, Mr. Harryhausen, they remain among the best effects ever put to film.