Siskoid’s Blog of Geekery reviews an episode of Doctor Who.
Categories Article
ADDITIONAL CONTRIBUTORS Biology of the Blogger

“Not a doctor, but THE Doctor. The definite article, you might say.” 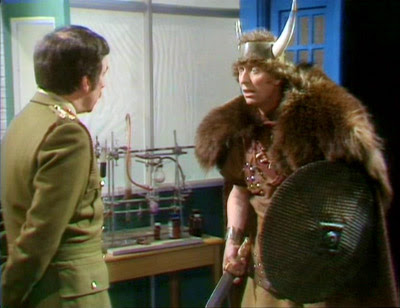 IN THIS ONE… The 4th Doctor’s first episode is also Harry Sullivan’s. UNIT and Sarah independently track a robot stealing weapon parts.

REVIEW: The Doctor’s dead, long live the Doctor. K’anpo warned us the newly-regenerated Time Lord would be erratic, but Tom Baker’s very first performance in the role goes beyond erratic and into joyous unpredictability. Every toothy grin, every flash of anger, every joke and pun, every use of that long scarf, comes as an idiosyncratic surprise and makes us realize how “normal” Pertwee’s Doctor was. The third Doctor might have sprung out of H.G. Wells or Arthur Conan Doyle, but the fourth… Well who knows where such a creature might have sprung from? And yet there’s a strong element of Sherlock Holmes in the character too, once he agrees to work with UNIT, always one step ahead and promping the Brigadier to work things out like some slow-witted Dr. Watson. This Doctor would rather be driven than drive, and lazily solve mysteries from a reclining position in the back of a jeep. Even in that moment, he’s driving the scene at breakneck pace, the epitome of fast talker, and meta-textually telling the Brig that he “must cultivate a sense of urgency”. Though this is a Terrance Dicks script, the humor seems all the new script editor Robert Holmes. At least, Dicks was never this funny. It goes from overt wordplay like “You’ve changed” (into new clothes) “Not again!”, to the more subtle “I’ll just slip away quietly” when everyone thinks he should be in sickbay. Everything the Doctor says is worth listening to. I don’t remember the last time I felt that way. The new opening sequence with a serious Doctor seems like a bad idea in the context of this energetic performance.

Bob Holmes’ other main interest is the Gothic, and though the story mostly plays out in bright interiors and exteriors, and indeed, isn’t yet being produced by fellow Goth Phillip Hinchcliffe, Robot still has some of those connotations. The eponymous machine is at first seen only from its own point of view – a trademark of the era that’s only just starting, though obviously, started much earlier – as a pair of metal claws or as a misshapen shadow. It is Frankenstein’s Monster. Either because of the heightened reality that comes with Gothic, or as a remnant of the Letts era, Robot is also mired in comic strip aesthetics. Director Chris Barry creates montages like the Doctor choosing various silly costumes before arriving at the iconic look and the walkthrough of the vault’s defenses like we’re in some heist movie. There are documents with TOP SECRET scrawled across them in felt pen. The Doctor’s manic gags includes breaking a brick in two (what was it doing on the table?). Professor Kettlewell has crazy mad scientist hair, and he’s apparently built a cartoonish robot. One might even put companion-to-be Harry Sullivan on that list, someone Sarah Jane calls old-fashioned (so of course the Brigadier’s taken to him), but is in many ways a caricature of the British officer, wot? I am, however, completely in love with the idea that he’s first addressed, inadvertently, as “And stupid!” by the Doctor. He’ll be a good comic foil, looks like.

The new Doctor’s introduction is all. The plot doesn’t even really register as secondary, possibly because it’s hard to see for the holes. As with Planet of the Spiders, Sarah Jane’s investigation into Think Tank accidentally sends her exactly where the unrelated UNIT mission is going. Dicks makes her look silly when she fails to address Think Tank’s director, Ms. Winters, because she thinks her male assistant is the real boss. It might be cute to turn the tables on the Women’s Libber, but in all other things, her research seems impeccable. What, did she think Hilda was a man’s name? At least Sarah’s proactive and resourceful, but then, half of what she accomplishes is possible because the Brigadier is feeding her top secret information because “there’s no one else [he] can tell”. Sarah gets back into the – unlocked! – off-limits area by showing a guard she has 10 minutes left on her UNIT pass, but he says he’ll check, so why doesn’t Winters put a stop to it when he does? That’s almost part of the point. The fourth Doctor doesn’t want to be UNIT adviser and can’t wait to leave, and it’s as if Robot is the story that will prove that he’s well above such mundane shenanigans – he’s got too much energy to waste on non-mysteries – and that UNIT stories have, as a rule, run their course. I’m actually surprised we ever saw UNIT again during Tom Baker’s era.

REWATCHABILITY: High – I wanted to play Part 2 immediately just to see what the Doctor would do and say next. I’d call that a successful introduction no matter how big the plot holes are.