Kent Peterson talks about some of the best cycling magazines out there.
Categories Article
ADDITIONAL CONTRIBUTORS Biology of the Blogger 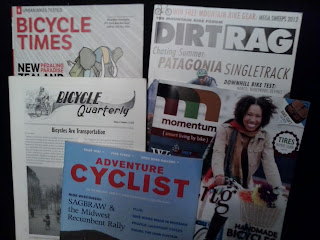 “What is your favorite bicycle-related magazine and why?”

Now this is in no way a scientific survey, vast swaths of people aren’t on Twitter and only a tiny fraction of the millions of Twitter users bother themselves with following the 140 character texts from some bike mechanic in Issaquah. By the same token, most of the users of the internet never cross paths with this blog. Given those limitations, however, I found the results to be an interesting look at the kind of folks who actually do read my stuff.

The most-mentioned magazine was Jan Heine’s excellent Bicycle Quarterly.  Bicycle Quarterly got raves for its technical articles, real world tests, historical perspective and as one person noted “Jan Heine knows more about bicycles and cycling than I ever will. The ads are cool, too.”

The next most oft-mentioned magazines were Momentum and Bicycle Times. As my friend Barb listed these two magazines as a tie for her pick of a favorite citing “reviews of bikes/gear I might actually buy and non-racers profiled.” Scott enjoys Bicycle Times’ back page “How We Roll” feature and his wife calls it her “get-your-stoke-on” magazine. Momentum got various positive comments for featuring good articles with basic info, lots of images and content for and about women.

Another magazine getting multiple mentions was Dirt Rag. Cited for its nice graphics and punkish attitude, it was also noted that the magazine is “fun to read.” I’d add that Dirt Rag also has better depth to its reviews than many of the glossier mags and I love its annual literature contest.

Before I mention my personal favorite magazine, I’d like to call attention to some other excellent, but perhaps less well-known magazines that were mentioned by Twitter folks. Although they are zines and not really magazines (no ads, no gloss, no BS) several people made sure to mention the works of Elly Blue. Elly’s zines are little books on a given theme are always nicely done with that indy, DIY, you can do it vibe to them. Go to http://takingthelane.com/ and check out her stuff.

Grant Petersen’s Rivendell Reader can be had in electronic form and some back print issues can be found at:  http://www.rivbike.com/product-p/rr.htm Again, interesting stuff for folks interested in the non-racing aspects of bicycles.

By the way, there is certainly nothing wrong with racing bikes but my own interests and those of most folks answering my question tended more towards other aspects of cycling. Of the zippier magazines, Peloton, Switchback, and Pavedmag were cited as having a “not just racing” approach. Rouleur was also called “glorious” and since it features the writing of Paul Fournel, I would have to agree. The racing classic Velonews is still loved as the go to source for racing coverage.

My friend Davey recommends two magazines called Boneshaker, one from the US and one from the UK citing their “beauty in bicycling” and “thrill of words.” I tend to trust Davey’s judgement in these matters. For those of you looking for a more urban bike vibe, check out Urban Velo, the product of a couple of good ex-DirtRag dudes. Based in Milwaukee, Wisconsin, COG is another nice city-focused magazine.

But my personal favorite magazine, the one that Christine and I both devour as soon as it comes in the door, is one you won’t find at your local newstand. It’s Adventure Cyclist and you get it as one of the many benefits of membership in the Adventure Cycling Association. This magazine is not about bicycles, it’s about traveling by bicycle and nobody combines great writing, wonderful pictures, solid information quite as well as these folks. This is the magazine that will inspire you to see the world from the seat of a bicycle. If you are not a member of Adventure Cycling, you’re missing out on some of the best travel tales available.

OK, I’m sure there are other great magazines out there. If you know of something great that shouldn’t be missed, please add a comment.

Sanya N'Kanta is a Jamaican-born musician currently based in Charlotte, NC who writes, performs, and produces songs with a wide range of musical influences and styles. Here, he shares an exclusive, stripped-down performance of a song from his new EP. These Are The Days will be released February… | watch

Delilia Black is a queer Haitian musician and performance artist originally from Port Au Prince, but now based in London. While hopping among genres, the music could be called Alt-Americana or as Delila puts it: “Electro-Mountain, Country-Noire, Punk-Country, Afro-Billy,… | listen

An epic and sweet indie/folk track that anyone with a heart can relate to. | read

Trump may be gone, but he’s left lots of power-hungry sycophants & family members in his wake. | read

Stephen detais his experience of contracting the coronavirus back in late February/early March of 2020, before lockdowns shut NYC down. He also shares how the busy Brooklyn music scene he’s a part of may have helped to spread it among his friends before people knew how serious the pandemic would… | watch

Inside Voices Records is a new Seattle-based record label founded by Bobby Granfelt, and featuring an eclectic roster of musicians stemming from a strong collective. In this episode, we're premiering a ton of great new music from the label along with their handful of previously-released tracks from… | listen