Who wins this battle? The actual judges scores were 126.62 points for Suzuki, and 117.32 points for Asada. This, combined with the short program scores, gave Asada the win by 0.05 points.

If you listen to the British Eurosport commentators at the end of Asada’s video, they are very confused as to how Mao held on for the gold medal.

What were my results? 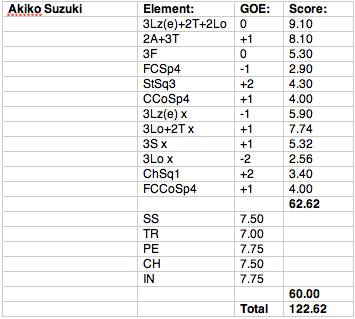 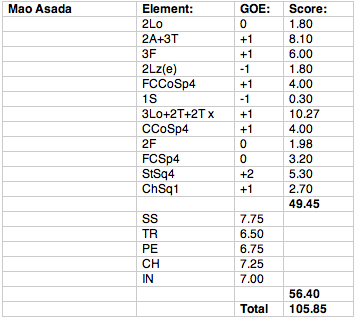 As you can see, I had Suzuki easily winning the free skate– by 16.77 points (compared to the 9.30 points she actually won it by).

A few things– I think both skaters were overscored in certain areas– specifically some of the spins. The judges seemed to be +2 and +3 happy today, but I think most of their spins were ‘good’ at best. Suzuki’s FCSp4 really should have had negative GOE, for example, but was still able to pull some +1. Don’t think so.

With that in mind, I had Suzuki 1.89 points lower technically, while I had Asada 3.33 points lower.

Program components, to me, were where the total joke happened. Asada’s program, for the first three or so minutes, has no life at all and she really could be skating to any music. Much like the jumps in this performance, it’s just so on-and-off until the footwork starts to gain energy. Also, her fifth jump element comes two seconds before the half-way point. That’s poor program planning in my opinion. She has nice basics and beautiful edges, but she really crawls through everything and doesn’t do too much in terms of transitions. I’ve always felt that way about her, honestly.

Suzuki has a nice program and was much more engaged. She has some nice transitional highlights and a great tension and build with the music. I do think she’s not as strong as Asada skating skill-wise, but everything else should have been higher in my opinion. Asada pulled off scores mostly in the 8’s for performance/execution (huh?), choreography, and interpretation. I just don’t feel like she was into this program at all.

For what it’s worth, Asada lost 14.85 points off her base mark just from the three jumps she doubled and one she singled in this program. 117 with three triples.

Suzuki easily wins this battle in my opinion.