Phaan Howng  is an American-born Taiwanese multi-media artist living and working in Baltimore, MD. She uses the media of painting, sculpture and and installation to stage the sublime and formidable beauty of an Earth post-humanity. Phaan received her MFA from the Mount Royal School of Art At MICA in 2015, and she had her first solo show titled Bioloigical Controls: If It Bleeds We Can Kill It at School 33 Project Space in Baltimore. She has also exhibited at Randall Scott Project and, ArtScape in Baltimore, the  Arlington Arts Center in Arlington, VA and the RE Art show in Brooklyn. She received a silver medal for her work in the show Color at the Brooklyn Waterfront Artists Coalition in Redhook, BK. And she has had reviews in publications such as Hyperallergic, Art F City, Washington Post and the Baltimore City Paper. 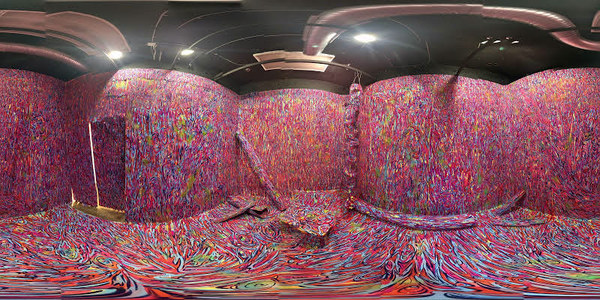 Phaan Howng, Biological Controls; If It Bleeds, We Can Kill It, 2017.

Eulogies of the Present Past was for the public programming portion Howng’s  installation, Biological Controls; If It Bleeds, We Can Kill It at School 33 Art Center in Baltimore, MD. For the first portion of the event, attendees were invited to write and recite a poem about our descent into the Anthropocene epoch while wearing a custom matching suit in the installation. For the second portion, attendees were also invited to karaoke to a sad song of their choice. Both portions were live streamed via the web to the audience from the installation to their room.

Phaan Howng, Biological Controls; If It Bleeds, We Can Kill It, 2017.

Host Kimberly Ruth
Kimberly Ruth is a New York based multi-media artist. Her work explores the failures and inconsistencies of language, especially in the digital age. Through text, photography, video and performance, she works to…